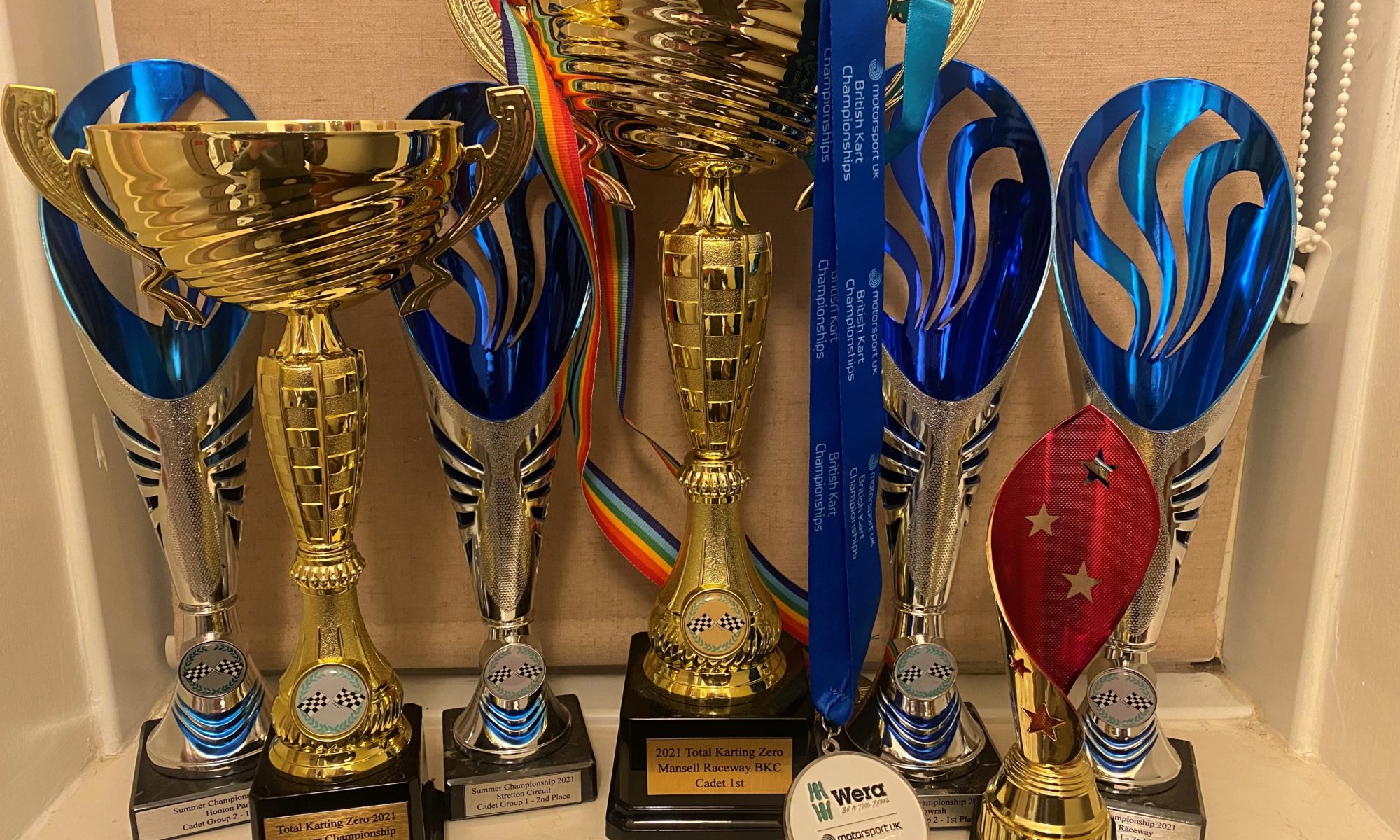 Round 1 of the Total Karting Zero summer championship brought us to clay pidgeon raceway just down the road from Froom and Yeovil where famous racing drivers like Jenson Button and Lando Norris honed their skills around the legendary circuit. The Saturday practice and Qualifying was in torrential conditions while the Sunday races were in drying conditions.

The weekend didn’t get off to a great start as an issue with the kart in qualifying meant we started in p2 which was the worse of the two sides of the grid to start on. However, this wouldn’t matter because on the start of heat 1 the kart didn’t start and the engineers had to reset the kart to get it going again this lost me a lap but I managed to fight my way back to p7 at the flag. In this series where you finished in heat 1 is where you start in heat 2 so I would be starting p7. I made a flying start and was p3 by turn 1 I then passed the leaders into hands hairpin before opening up an 8 second lead by the flag. In the series the average of your finishing position of the first heats used for the starting position for the final. I started p3 but ran wide and fell to the back 20 seconds off the lead but I set 5 purple laps over the course of the race to climb back and take p2 only 10 seconds off the lead when I crossed the line. This placed me 4th in the championship.

The second round of the season took us to Hooton Park in Liverpool. The weather this weekend would be very hot and dry over both days. This would be a mix of fast flowing and technical parts of the track making it amazing and challenging to drive.

Opposite to last time out the weekend started well by putting it on pole position by 0.019 of a second and averaging 42.2 mph around the lap. This meant I would start on pole position for heat 1 which after amazing defending by me I held on to take the win by 2 seconds. Because I won the first race I started on pole for heat 2 and won again but by only 0.4 of a second with an average speed of 42.9 mph. In the final it went very well the person who was on me all weekend had and issue and the person who was In 3rd for a lot of the day his chain came off leaving me to take the win and the fastest lap with an average speed of 43.1 mph over the course of the race.

This weekend we were invited to race at the British championships the most prestigious karting series in the world. It was to be at Mansell raceway a track set up by Sir Nigel Mansell CBE who raced in formula 1 in the 80s and 90s and won the 1992 world championship. The track is located in Honiton and is a very technical track.

In qualifying for the high pressured event I put it on pole by 0.14 of a second with a time of 58.25 which would put me in the ideal starting position for the race on Sunday. I then followed this up with a win in heat 1 by 8.4 seconds over my closest competitor. This then put me on pole for the second race where I showed my defending again to hold off the charging pack by 0.4 of a second over p2. In the final the top 3 were bumping and barging but I managed to just get the win by 0.11 of a second.

The third round of the Total karting zero championship like the British champs round also takes us to Mansell raceway but unlike the previous round it was hot and dry which makes for different racing than in the wet.

In qualifying I made a mistake on my final lap meaning pole slipped through my fingers by 4 tenths of a second but I did get fastest sector 1 of the whole session. In heat 1 I made a lightning start and took the lead but got hit and was sent round but I sliced through the field at times 3 seconds faster than anyone else and fought my way back up to p2 only a second off the lead. In heat 2 my kart didn’t start again and I had to reset it dropping me half a lap behind but I fought back to take p6. From starting p4 I made my way through to take p2 at the flag to cap off a good but disappointing weekend.

Round 4 of the championship takes us to Stretton Park in Leicester. The weather would be hot and sunny all weekend and the results would also be good.

Qualifying went well as I put it on pole position with a time of 39.798 seconds which was the ideal place to start on the grid as it had the ideal line into turn 1. In heat 1 I dominated with a lap 2 seconds faster than the rest of the field and pulling out a sizeable gap over p2. Then came Heat 2 where I once again won but only by 1 tenth of a second over p2 but this secured me pole for the final. The final was a bit worse. The start was good but the kart didn’t want to turn in for t1 and I lost the lead I then fell back after a spin but managed to make my way back up to 2nd after an eventful race.

Round 5 of the season brought us to the Thruxton circuit just down the road from Stonehenge and just behind the main circuit this weekend would be plagued with trouble for us but at least the weather was warm and dry for the whole weekend.

In qualifying all was good and qualified in p2 only half a tenth off pole and an average speed of 42 mph but in heat 1 it all went downhill. After avoiding a collision at the start I began to be down on power I managed to hold of the chasing pack but then exiting turn 1 it all went wrong when the chain came off instantly putting me out of the race. This meant I had to start last for heat 2 where I got stuck in traffic that was weaving all over the place and not letting me through this was a huge setback because it meant I only finished 6th instead of catching up to the leaders. For the Final I started 6th but had a bad start before avoiding an accident dropping me down I then got stuck again before overtaking them to take p5.

This would turn out to be an amazing weekend for us as we managed to get good results throughout the weekend. The weekend was dry on Saturday for qualifying but torrential for the Sunday races. The Rowrah circuit (Cumbria Kart Club) is located in a quarry and is one of the best and well know race tracks in the country.

In qualifying I had fastest lap for a long time before getting traffic on my last lap and just getting pipped to pole by half a tenth with a time of 1 minute and 2 seconds. In heat 1 I put the polesitter under pressure off the start and he made a mistake into hairpin 1 and I eventually won the race by 33 second and getting the fastest lap. In heat 2 I started from p1 and won again by 26 seconds with once again the fastest lap. This meant for the final I would start from pole and I made it 3 from 3 by winning the final with the fastest lap securing p2 in the championship after a good year of racing.